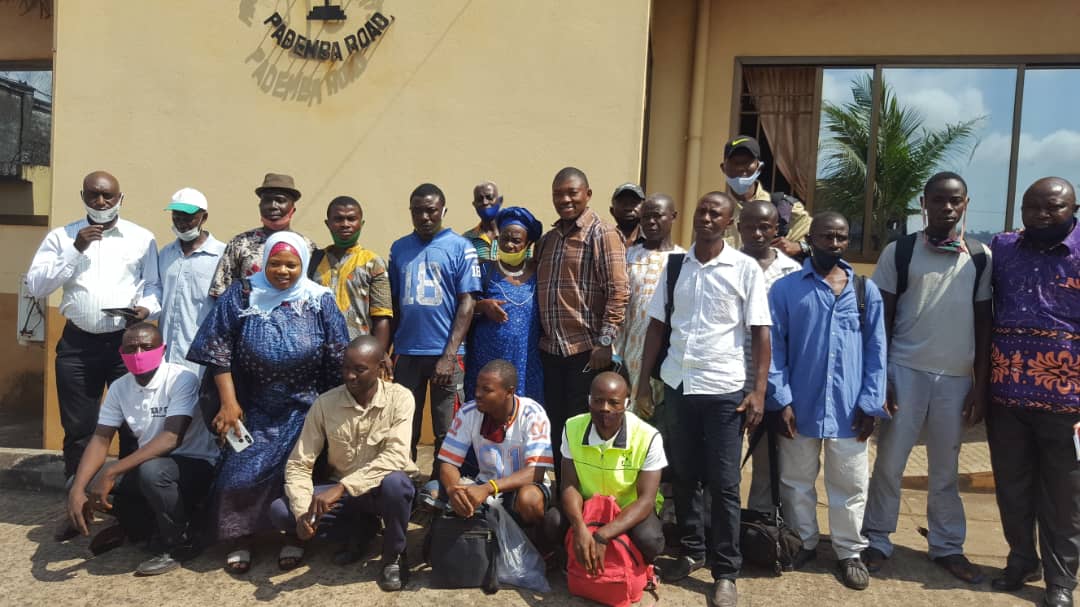 On the 9 th of December 2020, seventeen citizens of Malen Chiefdom, Pujehun District, including a sitting Member of Parliament, Honourable Shiaka Musa Sama, appeared for the last time before the Magistrate Court No.1 in Freetown, after almost two years of a protracted process, with constant adjournment. Magister Hannah Bonnie declared that “the matter ceased to proceed” and that the accused “are all discharged”. The eighteen (one died seeking justice), now seventeen accused were all members of the Malen Affected Land Owners and Users Association (MALOA), a Community Based Organization, advocating for the land rights of their members in the face of the operations of the large-scale palm oil producer, SOCFIN. They were charged with incitement, riotous conduct, conspiracy to commit a felony, and malicious damage following demonstrations and skirmishes between local security forces and the Poro Society on the 21 st of January 2019 at Jao Junction. This situation led to the deaths of two citizens, Mohamed Ansumana and a man named Mustapha. Their deaths have since not been investigated despite a pathologist’s report. The arrest and detention of only MALOA members was perceived as arbitrary by Civil Society Organizations.

This is the latest in a long list of actions to criminalise human rights defenders denouncing the negative impact of SOCFIN’s operations since 2011 on fundamental human rights of affected communities. “It represents a victory for the protection of land rights defenders in Sierra Leone and the world” says Joseph Rahall, Executive Director of Green Scenery.

The decision of the court to absolve MALOA members though unclear is a welcome one. The Magistrate’s declaration that “the matter ceased to proceed” may imply that MALOA was not involved in the violent incidents of the 21 st of January 2019, yet further reasons for their absolution could have been accentuated for the public to fathom. However, land owners and users of Malen Chiefdom are expressing confidence that the land disputes in Malen will be peacefully resolved.

Observing that the matter is reprieved a day to the International Day of Human Rights may indicate that human rights issues seem to be taken seriously by the government. Therefore, Green Scenery is drawing the attention of the government to the dialogue process commissioned in 2018. A report was submitted to the Vice President in September 2019 by a committee for further action, based on recommendations by a committee. Green Scenery believes that the dialogue is an important step to deal with a major human rights issue, the right to property (land) enshrined in the Sierra Leone Constitution, embedded in the Universal Declaration of Human Rights and guaranteed by the African Charter on Human and Peoples Rights.
We appeal to President Bio, to put back on track the process he commissioned over two years ago given that the threatening Corona Virus is largely contained in Sierra Leone and government has resumed its effective work.

Green Scenery is dedicated to the resolution of the Malen Land Conflict. We assure the government of not only our support but the support of our partners working on this issue and call on all parties concerned to show true commitment to the process.