Over the past ten years Green Scenery has been accompanying land owners in Sahn Malen, Sierra Leone, who oppose the presence of the agricultural company Socfin. Due to its reports on the human rights implication of the company’s activities, Green Scenery has been the target of a smear campaign in local news outlets and social media. Most of the defamation articles have also targeted FIAN-Belgium, who is reporting on the company’s activities in Belgium, where the company is registered.

Green Scenery appeared in articles with titles such as “More trouble for Green Scenery”, “Why are Sierra Leoneans destroying the country?” or “What’s hope for the saboteurs?”. The stories which lack informative content and strain to follow journalistic standards most often concentrate on lashing out at Green Scenery.

In 2019 and 2020 Green Scenery reported the editors of two local newspapers to the Independent Media Commission. The Satellite Newspaper who did not understand a visit of Green Scenery to Belgium misinformed the general public by mentioning that Green Scenery had “hoodwinked the senior executive of FIAN Belgium to stage a demonstration in Belgium” and further alleged that FIAN had threatened to withdraw funding from Green Scenery. 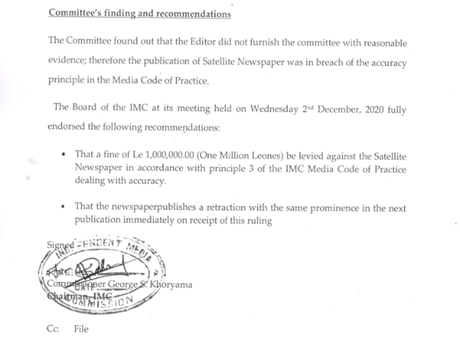 The assertions were far from reality, as FIAN as a prominent international organization was in fact the initiator of the demonstration, having received complaints from communities affected by Socfin’s operations in Cameroon, Liberia, Cambodia, DRC, Nigeria, and Indonesia and had never had a donor relationship to Green Scenery.

Over the years, Green Scenery has reported those newspapers to the Independent Media Commission – the autonomous body regulating media. Each time, the redactors were found in offence of the code of practice for not following journalistic standards. After those lengthy processes, the newspapers were condemned to retract their publications, publicly apologies to Green Scenery and pay a fine of Le 1,000,000.

Defamation against Green Scenery sometimes also takes a more creative or perfidious shape. In the beginning of 2020, a press statement impersonating Green Scenery had managed to make its ways through Whatsapp chats. The communiqué claimed to be written by Green Scenery’s programme manager and to expose the misappropriation of US$98,000,000 by the organization’s executive director, in order for him to “buy flashing cars for his wife”. What should have been easily discarded as a falsification, especially due to the unrealistically high amount of money and the simple accusations, is unfortunately taken seriously in a country affected by rampant corruption.

The Malen Affected Land Owner Association (MALOA) and their former speaker, the current Member of Parliament representing Sahn Malen chiefdom, Shiaka Sama, have been the targets of the same campaign. While the same newspapers have published contemptuous and inaccurate articles about them, ficticious press releases were publicized in social media in the name of MALOA, pretending that the organization abjured their initial objectives and long-term partners.

All those publications have similar features. They never bear upon the issue or argument in question. They use eye-catching headlines and scandalous wordings, often exhibit coincident grammatical mistakes, and in some occasions display the exact same content.

While this smear campaign, already lasting for seven years, does not put the reputation of Green Scenery or Mr. Shiaka Sama in jeopardy, it does affect the situation in Sahn Malen by creating division and mistrust among its citizens. Labelling the local human rights defenders and politicians as unpatriotic, evil, brainwashers, enemies of development or saboteurs generates tensions and discord and does not promote the objectives of all parties involved in the dispute, that is, a peaceful resolution to the benefit of all.