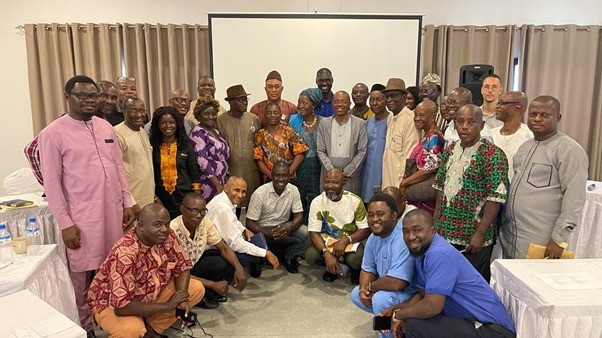 The Ministry of Land organized on the 20th of May a Joint Round Table Dialogue with Paramount Chiefs, Civil Society Organizations and investors to address their concerns towards the National Land Commission and the Customary Land Rights bills tabled in Parliament in September 2021.

The Ministry had previously engaged the Paramount Chiefs through the National Council of Paramount Chiefs (NCPC) and the investors through invest Salone separately on their concerns, but failed, however, to engage the Civil Society in the same way.

A working document with areas in the bills to which the NCPC and the private sectors had proposed alterations/adjustment were discussed. The task was for the CSOs to accept, decline or propose an adjustment to those changes. The discussion was facilitated by the Minister of Land Dr. Turad Senesie. The most important changes made were in regard to the size (from 5,000 to 10,000 ha) and the length (from 21 to 50 years) of large-scale lease agreements. Furthermore, paramount chiefs asked to be included in several provisions, such as, as authorised officers or as final signatories to lease agreements.

Although there were tensions leading to sporadic confrontations between the CSOs and NCPC, agreements were reached eventually, mostly through concessions to the NCPC. In its conclusion, the NCPC representative said that he was partly satisfied, and requested the Minister to stay open-minded for any further comments as they would bring the issues discussed to their membership. Civil Society and the Ministry expressed being satisfied with the agreements achieved and were now looking forward for the bills to be discussed in Parliament. Private Sector representatives were not present anymore at the time of concluding the event.

Women lobby with Their Parliamentarians over the Enactments of land bills