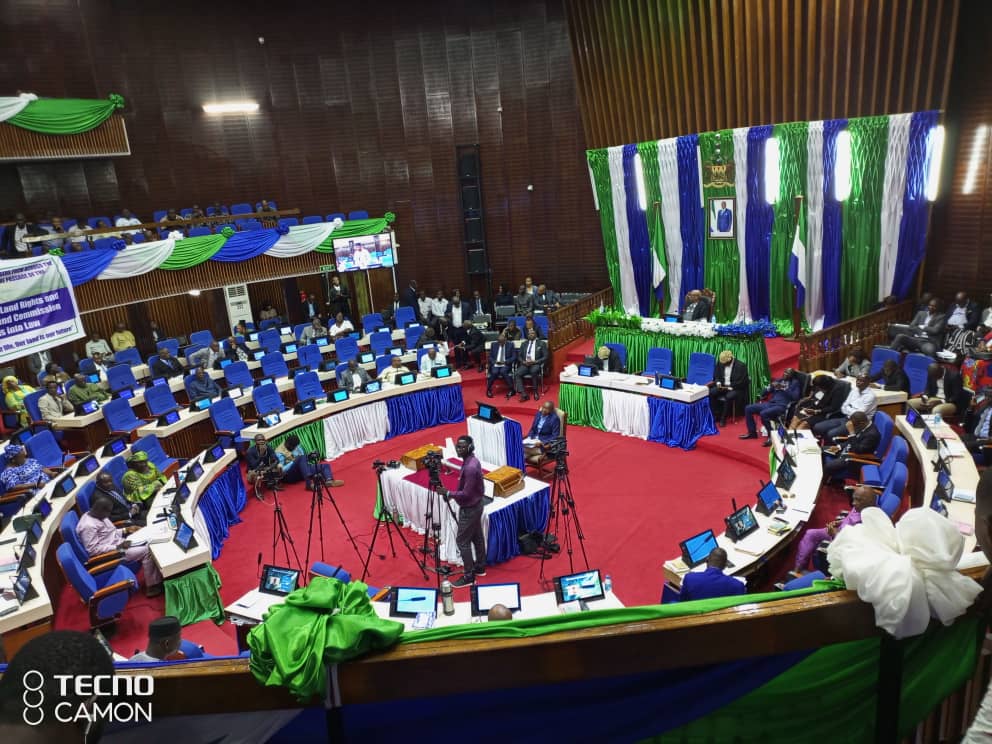 In his presentation, the Minister of Lands, Housing, and Country Planning, Dr. Turad Senesie recalled how the country had been grappling with economic challenges, relative to land resources. According to him, proper utilization of land resources will lead to national growth amidst collective efforts. He insisted that the bill would address the economic problem and similarly reduce cases before the courts on land matters. The Minister went on to say, if the bill becomes law, more investments would be attracted, land ownership would be registered and subsequent lead to sustainable development. He highlighted several important benefits of land use including agriculture, investment, economic growth, right, and other related aspects. He informed me that the bill was in Parliament before now,   but they later took it back for additional consultations.

The Chairman of the Committee on Land in Parliament, Hon Quintin Salia-Konneh recalled the difficult passage of the bill in 2015 and went on to say, the Act would address the acquisition problems. The Chairman spoke about the endemic corruption surrounding land and assured that with the passage of the document land tenure would be positive. According to him, the National Land Commission Act and The Customary Land Right documents would enhance permanent resolution. He spoke comprehensively about land conflicts and also informed the House that, in most cases, the poor suffer immensely and went on to highlight the importance of the bill and its dynamic nature, relative to sanity, registration, and regulation, “Over hundred years, this is the very first time we are bringing such a bill”, he stated and went on to explain the inclusivity of the board and management of the document.  He stated that the bill is not contentious.

Hon. Abdul Karim Kamara said the bill is necessary and informed the House that, women had suffered a lot in the land tenure system in the local settings. Women, he said chased this bill to Parliament, because of the circumstance they face.”Our land our heritage” he stated and went on to say, he had been a victim of land grabbing and commended the Minister for dealing with land problems. He insisted that, with the passage of the bill, the ministry will be able to address several problems and emphasise women’s rights to land.

The bill he said would address several issues and spoke about the Sahn Malen saga and expressed that, Parliament may not approve any land that would imprison the people.

Hon. Neneh Lebbie informed Parliament that, she had been part of the process of the bill, and said that the bill is on track. She informed that the bill had attracted many people across the country, pointing at the Gallery occupied by women demonstrating support for the bill. She categorically stated that widows and other women who had been deprived would benefit from the bill, and maintained that the bill, when passed into law would address their problems. She told the House that, people who occupy land leave very little space for facilities and asked the House to consider those aspects, in light of the passage. She asked the authority to look into matters regarding the land lease.  “This bill is not controversial” she noted and commended President Bio for appointing people with wisdom and heaped praises on the Minister.

Hon. Rebecca Y. Kamara predicated her submission on women’s rights and recalled that there had been no structure in the land tenure system. “I am happy that women are considered on the board and commission”, she informed. The MP said women had suffered so much on land rights and emphatically stated that a lot of women are land users and not owners. She informed Parliament that, she had been an advocate for land rights and went on to speak about the male chauvinism surrounding land tenure. She insisted that the document would address the problems.

An Independent MP from Kailahun District, Hon. Emelia Lolloh Tongai said women had suffered so much and went on to applaud the Minister, and also nominated the Minister of Land as “He for She”, and informed the latter that he would be remembered for his good job. She threw light on the attitude of rapacious land grabbers and referenced circumstances depriving women of rights to land, through the archaic law.

The Chief Whip of Parliament, Hon. Dickson Rogers commended the Minister for his proactive moves. He said the bill would give Sierra Leone over four hundred million dollars yearly. He said the bill would bring sanity into the home, family, and community. The Chief Whip said women had been disadvantaged for far too long and applauded the Minister for 30% quota for women in the bill and also presumed a fair share of land to every sector.  The MP went on to reference the United States land tenure system with women having enough percentage. He expressed hope for the passage of the bill.

The Leader of C4C Hon. Saa Emerson Lamina referred to the bill as a renaissance and related the bill to other development sectors. He spoke about land tenure and demand. He heaped praises on the Minister for his dynamic position, especially on the quota given to women and the essential benefit of the regularization. The bill he said is positive and went to speak about the moribund land tenure system. He expressed happiness over the good nature of the bill and went on to reference other countries that are benefiting from similar laws. Setting up of the committee and legality he stated were great and urged colleague MPs to speedily approve the bill.

An Independent MP from Pujehun, Hon.Sheika Sama while contributing to the debate, recalled circumstances surrounding Sahn’ Malen’s situation and expressed disappointment. He expressed hope that the bill would address their problem in that community. He informed the House that, so many people had lost land ownership. Many people he said including women had been deprived of the right to land and insisted that they should have equal land rights. He presumed new composition for the land commission. He informed the House that President Bio made a campaign promise on the Sahn Malen land issue and expressed hope that the latter will fulfil his promise.

Hon. Foday Mario Kamara supported women’s rights in the bill and asked that the bill be popularized. The MP supported the position of traditional authorities and recalled that, when local people were removed from land matters,  the problems started envisaging.

Hon. P.C. Haja Bintu Meama Kajue Koroma commended previous speakers for their concerns and informed the House that, they as Paramount Chiefs had consulted the Minister and assured Parliament that, they are satisfied with the bill.

Hon. P.C. Prof. Kangbai Joe  Macavoray said names and positions of Paramount had been tarnished in land issues and informed the House that, the bill is going to exonerate them from the false assertions

Hon. PC Alie Badara  Sheriff expressed appreciation over the bill and informed MPs that, they as Paramount Chiefs own a lot of apologies to women, relative to the traditional system on land tenure, and said the bill is creating a level playing field for all. The Paramount Chief said if people, want a nation to grow, they should place women at the helm of affairs.

Hon. P. C. Sahr Youngai  Kontanday M’briwa thanked the President for promoting such a bill and informed Parliament that, the bill is a major reform or radical one, that would change traditional land tenure to a modern system and positive management. The bill, he said is trending on open participation and accountability in land management adding that, it promotes investment. On challenges, he said the powers of the Paramount Chiefs are going to be limited positively. “The bill before us is timely” he concluded.

Hon. Ibrahim Tawa Conteh thanked the Minister for changing what he referred to as the status quo and went on to categorically state that, every member of that Ministry should be removed and asked Parliament to assist the Minister on that positive change. He emphasized that most of the workers are not promoting the vision of the Minister, but they are betraying his course. He decried the corrupt nature of the officials and informed Parliament that, he intended to move a motion to empower the minister to clean the ministry.

Hon. Dr. Mark-Mahmoud Kalokoh recalled a positive statement from the Minister on land holding and informed the House that, the Bill needs to be thoroughly internalized. He supported the position of the immediate speaker, for Parliament to help the Minister, and asked that the sensitization of the bill be cascaded. He asked Parliament to be mindful of the implementation of all laws to protect the rights of women. “We want a paradigm shift from that, to a more integral part” he concluded.

Hon. Rev. Vincent Horace gave accolades to the President for appointing Dr. Turad Senesie as Minister and informed the House that, the Western Rural had more conflicts on land and according to him, there are  lot of land grabbing in that area. He went on to elaborate on a series of land conflicts across the rural district and underscored that, with the Land Right Commission, the problem will be solved. He implicated Land Ministry officials for rapacious land grabbing.

Hon. Daniel Koroma referenced a statement of the Minister positively and informed the House that, they are in full support of the bill. The MP said they want a clean bill. The MP raised serious concerns about the Memorandum, the repealing and duplication, among other matters. He said if, all those concerns are addressed, the bill would become a good law.

In rounding up the debate, the Leader of Opposition Hon. Chernor RM Bah said land is life and also an investment. He said land is the greatest asset and must be treated seriously. He expressed appreciation for the position of Paramount Chief representatives on the bill and commended the Minister for keeping to his words.” The Minister is delivering”, he stated and decried the former minister. The document he said is relevant and timely and said there was no way the country was going to develop if the land is not properly managed. He informed that the old land tenure system had not protected the investors and informed that, the challenges would be affected by the approval of the bill. He spoke about circumstances that resulted in conflicts, land banking, and title registration, and expressed hope that the document would soon address those problems. Land investment in agriculture, the Leader said would be secured, relative to development and resource mobilization.  He described the document as a very good one and encouraged his colleague MPs to pass it into law with amendments.

In concluding the debate, Leader of Government Business, Hon Mathew Sahr Nyuma thanked all for their contributions, especially the Honourable Paramount Chiefs. He applauded the Minister and informed the House that, they would look at the legal framework, adding that the law must be homogenous and consistent, referencing previous speakers. The Leader said they were mandatory for the structure and composition of the affirmative 30% quota. “We can only transform those policies through affirmative action” he stated. He expressed hope for settling problems during the implementation of the document and went on to speak about the rapacious land grabbing.

The Leader spoke about the emphatic statement of the President on land reforms and reassured all of the positive development.