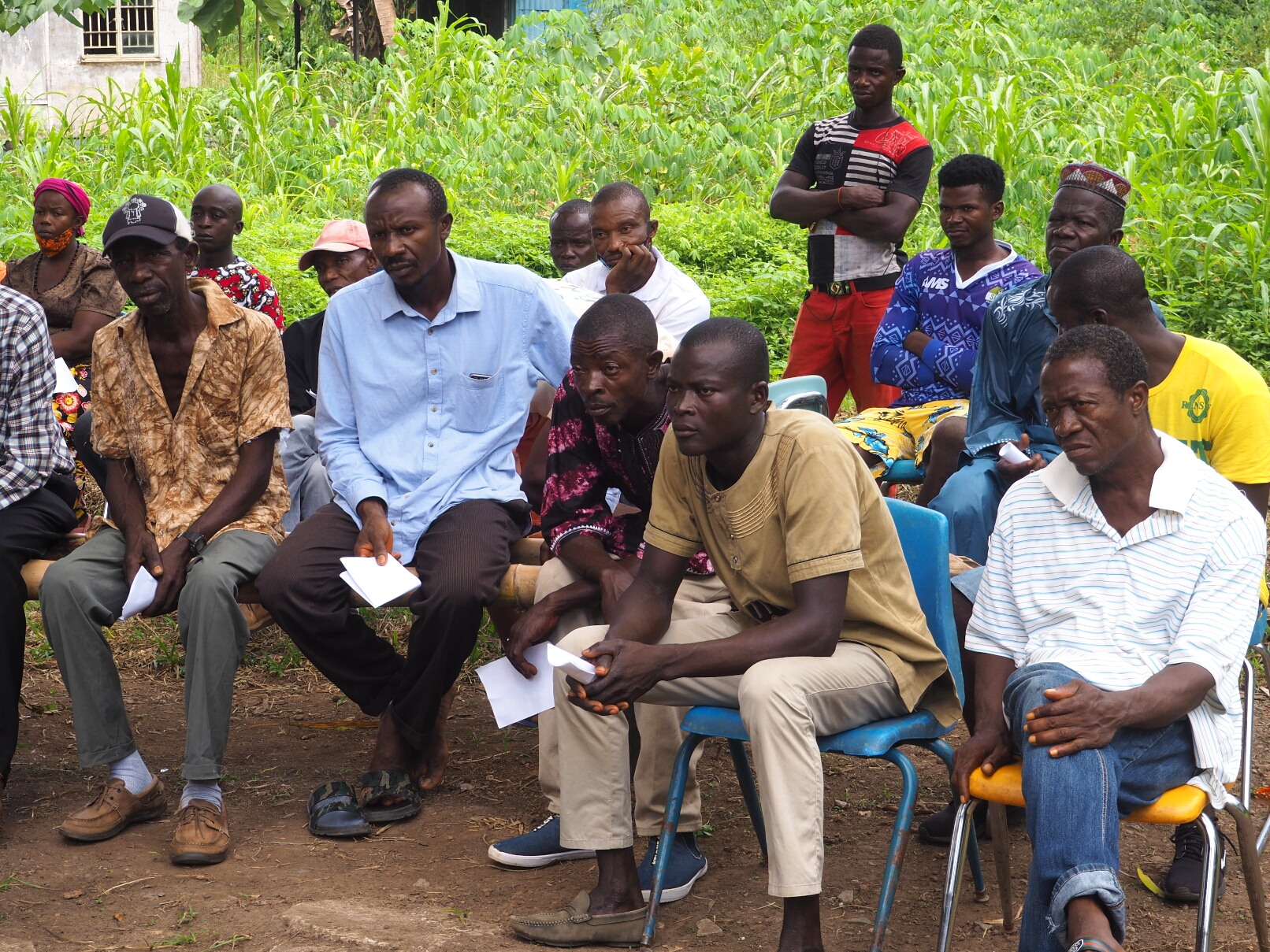 4000 trees planted in Kasewe Forest Reserve the Site of Symbolic Tree Planting by Ministry of Environment and its Implementing Partner, Green Scenery

Wednesday, November 11, 2020, one of Sierra Leone’s forest reserve, Kasewe in the Moyamba, Yoni enclaves hosted the Ministry of the Environment for the first time since it was established in November 2019. The event leading to this, was a symbolic tree planting organized by the national NGO, Green Scenery, one of the chosen implementing partners of the Ministry of the Environment in the National Tree Planting Drive aimed at planting five million trees in the country. The ambition is to return forest cover to Sierra Leone, a country already faced with serious deforestation and with only 3% of forest cover, according to a Green Scenery estimate.

The event was chaired by Mr. Muniru Y. Sankoh, a man who placed his service to government in the Ministry of Agriculture for over 40 years and is at present the Manager of the ABC at Moyamba junction.

After the welcome address from the Chief of Moyambawo-Fakunya, Pa Alpha Bangura, who welcomed all guests into his community, expressing the need for a continuation of these events meant to lead to development, and pledging his support to government’s initiatives, the Executive Director of Green Scenery was required to shed light on the purpose of the event.

In his brief remarks, Joseph Rahall impressed on the gathering that the country has lost a very significant percentage of forest cover and estimated that only 3% of Sierra Leone’s forest cover remains and is still reducing. He said that there is need more than ever to bring back the forests as he reminisced that Kasewe, giving his childhood memories was always very cool with heavy mist at most times of the day. He mentioned that many species were discovered in the enclave, sighting fishes and plants. He emphasized that Kasewe needs to be protected and improved upon, to present a truly world class heritage.

Rahall said that as a result of the national dwindling forests, the government has triggered a national reforestation programme in which tree planting should be carried out throughout the country. The planting he said, is to be carried out by implementing partners of which Green Scenery is a part. Rahall mentioned that the gathering in Kasewe, was to undertake a symbolic tree planting exercise of the 4000 trees that were supplied to Green Scenery in late October.

While thanking all guests, he concluded that trees are of tremendous benefits to man and the world and advised that any time we cut one tree, we must plant at least three in its place.

In his remarks, the Chairman Mr. Muniru Sankoh referred to the statement of Mr. Rahall pointing out that tree-planting should be a necessity as the world experiences Global Warming and its effect. He said Kasewe has served glorious purposes in the past but that it is facing levels of threat at the moment. He then referred to the government initiative as one in a positive direction, echoing that with the kind of statistics just mentioned, it is very important and crucial to returning the forests. He further explained the benefits of trees to human, emphasizing the release O2 by plants, especially trees.

The councilor in his brief statement expressed warm welcome of the event of tree planting and gave a brief perception of Kasewe. He advised community members to be supportive of those showing interest to invest in their areas.

In her capacity as the District Forest Officer (DFO), Madam Mary Gigba, who also represented the Director of Forests SL, conveyed greetings from the Director, Madam Kate Garnett who she said was on another assignment from the Minister. Madam Gigba emphasized that as development partners explore plans for Kasewe, the communities should be encouraged to equally give support to these partners. Mary narrated a long list of benefits of trees and stated that it has been government’s call to “cut-one-plant-five” because there is high chance one will survive out of the five. She stressed on the need to maintain the growing trees because lack of maintenance has in the past led to their destruction. She left guest with the good practice in our culture of planting a tree in respect of our new born babies; “planting the navel.”

In his address to the stakeholders, Mr. Edwin Baimba, Acting Deputy Director of Environment, Ministry of Environment, representing the Minister of Environment, conveyed the minister’s kind regards to all. “The minister recognizes the importance of this symbolic tree planting and therefore asked that I represent him to celebrate the event with you” said Mr. Baimba.

He said the Ministry of Environment is very new. It was created in November 2019, through the wisdom of His Excellency, the President, Dr. Maada Bio. Baimba informed the gathering that the President attaches high importance to the environment, which is why he made it as a standalone ministry to address the numerous environmental problems caused by us. He listed all the agencies and departments that make up the Ministry citing; NPAA, Forestry, Meteorology, EPA, etc.

He went on to educate stakeholders on the benefits of trees and making a parallel that when we destroy trees, we are concomitantly destroying ourselves, citing the dreadful Motormeh incident as one caused by the activities of human beings.

Baimba further informed all that an inter-ministerial committee has been established by the President to address the issue of deforestation. It is out of this inter-ministerial committee that the decision to engage in a nationwide tree planting was taken. He said that over one hundred and ninety implementing partners have been engaged by the Ministry to undertake out-planting of seedlings supplied to them. Green Scenery is one of such partners and government is looking forward to their performance. “As a matter of fact, I am en route to monitoring the performance of the IPs starting today with Green Scenery” he stated. He then concluded by declaring the occasion of the symbolic planting open.

The Chairman entreated the guests to follow the Forestry Officer of Kasewe who was charged with the responsibility of taking the guests on the tour of the 27 acres of land that was planted with 500 cashew and 3500 Gmelina trees. A large portion of the plot of land was appropriately applied as agro-forestry in which cassava was interplanted with the forest trees. A brief tour was conducted towards where the symbolic planting was done in the following manner; the representative of the Minister, the representative of the Director of Forests, Chairman of the event, the chiefs, and the community representatives.

The event was concluded with refreshments being served to all present at the event.