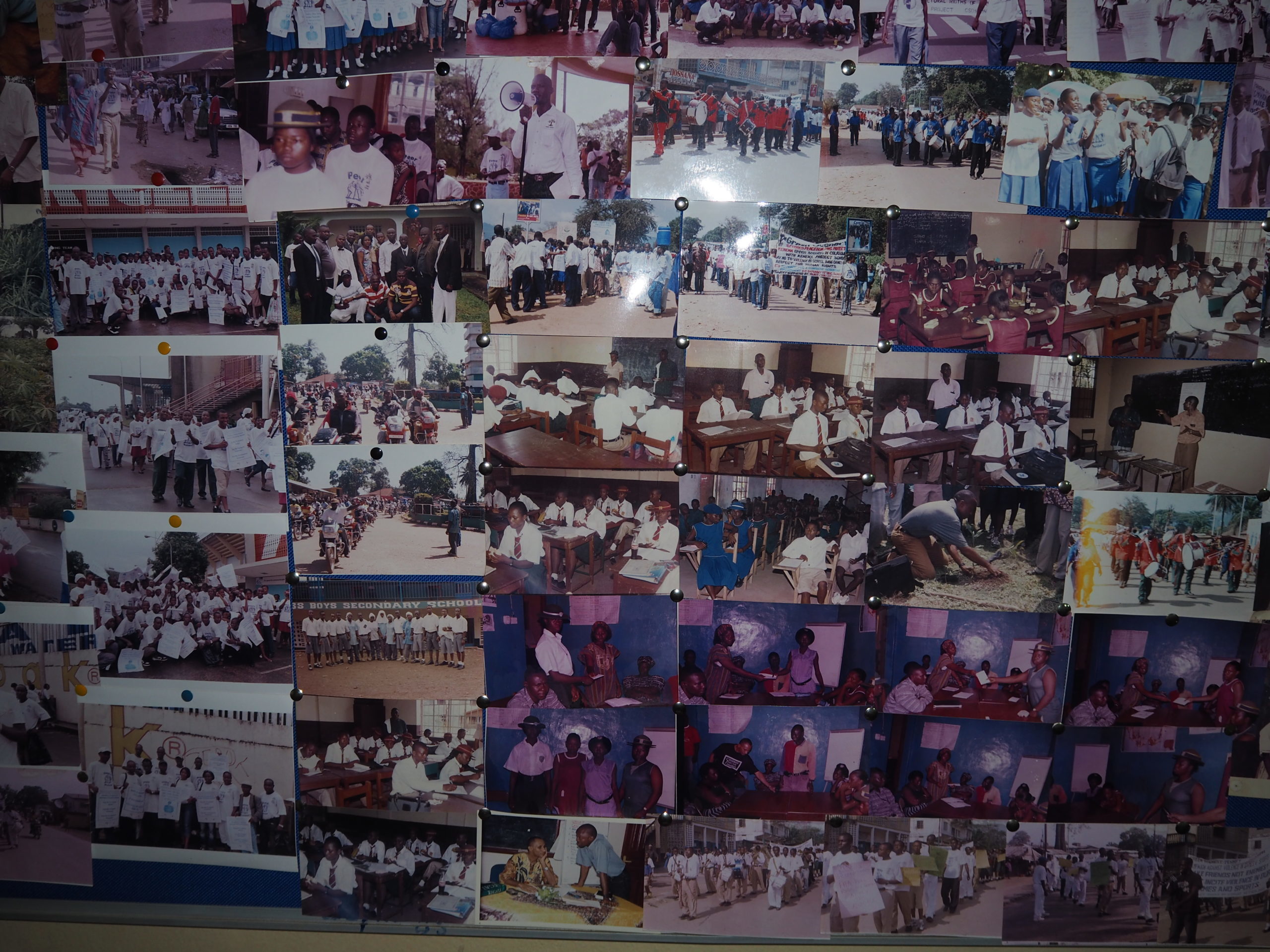 On Friday 18th October 2019, entering the exhibition in their meeting room, one palpably lived the history to a great extent upon seeing project titles and reports dating back to 1996 with funding from the first donor partner the International Union for Nature Conversation (NC-IUCN). The Director said the support was as a direct influence of the then Director of Forests Mr. Palmer of blessed memory. Interestingly one can observe the frequent traffic of visitors. The Judiciary, the Ministry of Agriculture, the German AGEH, Christian Aid, CARL SL and a host of others came around to see for themselves.

Reflecting on the past on Sunday, 20th October, the Executive Director mentioned colleagues like Abayomi Charles Roberts, Sylvester Samba, Maybelle Gamanga, Donald Lawson and Vandy Rogers (both of blessed memory), Ahmed Turay, all of Government Model Secondary School. We also had Augustine Allieu, the first secretary of PGS at Albert Academy School and some more in Government Rokel Secondary School and Muslim Brotherhood Secondary School as the pioneers of the initiative after he raised and discussed the concept with them. Rahall mentioned the odd jobs they did, like beautification of domestic gardens, art work and adverts for private businesses to raise funds for the PGS activities.

He briefly truncated the Green Scenery history into three phases: first phase 1989 to 2002, second phase 2003 to 2009 and third phase 2010 to 2019. Referring to the first stage as the formative stages, the second was the consolidation stage and the third is the networking and expansion stage. He referred to the coming years as the institution’s creation stage. Rahall recalled and praised and thanked all development partners past and present that have accompanied Green Scenery in its 30 years journey.

Martyna Foday a long serving Board member who served as chairperson of PGS in the early days in her account further pieced the jigsaw puzzle together as she narrated accounts of the past, particularly on how she was made to become a PGS member. She narrated fond memories of her “recruiter” Vandy Rogers also of blessed memory. She thanked all that were present at the occasion especially the development partners, appealing to them to continue their support to the good cause of Green Scenery.

In her remarks, Helen Bash Taqi, one of the serving Board members, said Green Scenery has not only come a long way but has proudly worked for Sierra Leone. She recounted some of the projects that the organisation has implemented around the country, especially in very difficult terrains like in the Gbap Gbongokama region, during which Green Scenery pioneered the location and was the first organisation to ever enter with a vehicle in the enclave to implement an initiative supported by the Netherlands Committee for the International Union for Nature Conversation. Madam Bash Taqi guided the programme to its logical conclusion.

The high point of the day’s programme was the awarding of certificates to long serving staff members both past and present; people like Fatmata Salisu, Mr. Claudius Williams, Francess Mawendeh, Edward Fatoma, Fudia Swaray, and Theresa Kallay.

In a brief interview with the Executive Director about his impression of marking the 30th anniversary of Green Scenery, he remarked that the event was an in-house event, meant to be small and low key. Yet he said, “we explored, we met like a family, we told our story, we made speeches, we earned awards, gifts and certificates, and left fulfilled as a family.”

See the article in the Patriotic Vanguard article here