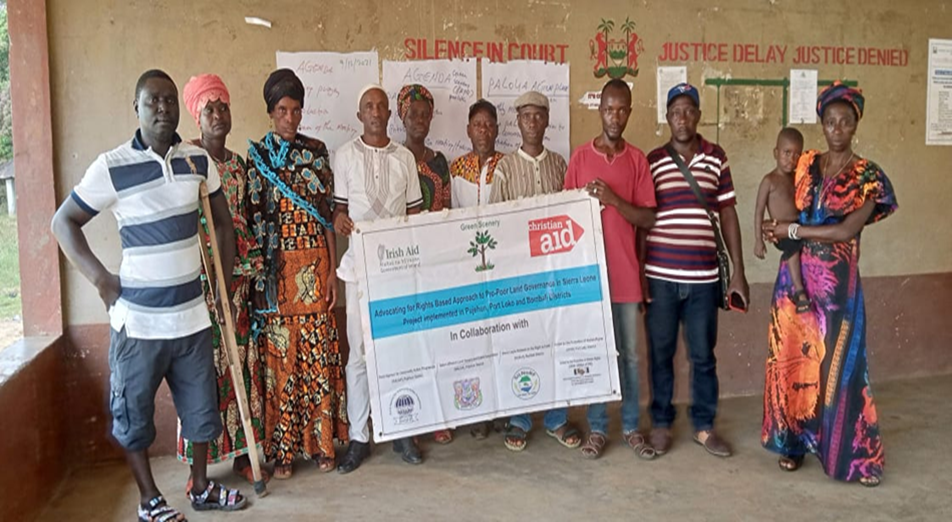 Green Scenery continued its campaign for the repeal of cap122 and several times advocated for the enactment of the National Land Policy into law. Green scenery influenced the Ministry of Land through the VGGT secretariats for the establishment of the Technical Working Group to institutionalize the reform action. Through the IAPG11 program, it worked in cooperation with the Technical Working Group (TWG) on the contents of the two Bills/Act and influenced its onwards forwarding to the relevant institutions and finally to Parliament for debates and approval.

In Pujehun, Green Scenery maintained its support to the Malen Affected Land Owners and Users Association (MALOA) who claim their rights in a dispute with the large agribusiness Socfin. Together they wrote letters to President Bio reminding him of the promise he made to Malen citizens during the 2018 Presidential and Parliamentary election. Green Scenery further organized capacity building training for both MALOA and other key stakeholders at the district level in advocacy, conflict mediation strategies and Customary Land Rights and the Land Commission Bills/acts. The knowledge acquired by MALOA and other key stakeholders at the district especially the Legal Aid Board, Senor District Officer, Office of National Security (ONS), influenced their decision to engage the President and advocate for a sustainable solution to the Malen land conflict.

Three women’s groups in the Romani community, Makonteh chiefdom Port-Loko district, after receiving a series of capacity building training and support from Green scenery through the IAPG11  established Village Saving and Loan Associations (VSLA), on their own constructed a community centre from the income raised. The community centre hoped to bring a lot of benefits to the community through community meetings and other activities that are relevant to the community.

In Maroko community Yankaysa section Bombali district, Women’s groups on their own raised resources from the VSLA and established a small scale farm to address some of the social and economic problems. The group used the resources  raised from the produced to pay school fees for their children.The VSLA initiative has helped to uplift the social and economic well-being of   rural women in Maronko community.

National Conference of Paramount Chiefs on Land and the Constitution