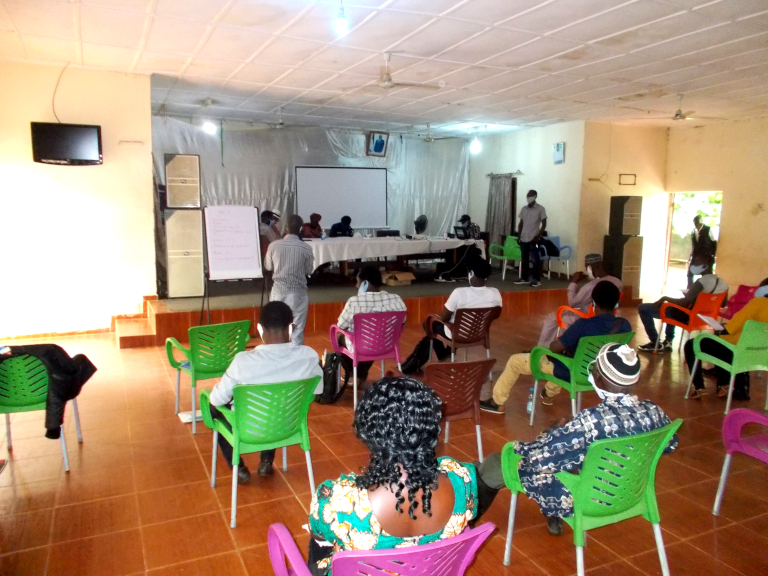 Since the 29th of June 2020, Green Scenery through the IAPG and AGIAMONDO project, Green Scenery is engaged in a series of project activities in Pujehun district. The activities included the distribution of food and non-food items to support communities in the face of the COVID-19 epidemic, stakeholders consultations on the ongoing land reform at district and community levels, and media engagements. The stakeholders engagements and consultations will continue in Bombali and Port-Loko districts respectively.

On the 30.06.2020, Green Scenery and its implementing partner Rural Agency for Community Action Programme (RACAP) Pujehun district, presented food and non-food items to over ten communities in the IAPG operational areas Pujehun disrict. The 150 (50kg) bags of rice, face masks, and veronica buckets were presented to the EOC during the district stakeholders meeting at DECOVAC center pujehun town. The presentation was witnesses by the EOC team pujehun, the Office of National security (ONS) Pujehun, the Chairman of Pujehun district council, the Resident Minister South and the district officer (DO) of Pujehun district.

After the presentation of the COVID support to the EOC at district level, the exercise proceeded to Ngandon, Malen were food and non-food items were distributed among ten communities.  Beneficiaries appreciated the gestures and expressed gratitude to Green Scenery and Christian aid for the support. More than three thousand five hundred beneficiaries gained from these interventions.

In July 2019, the government of Sierra Leone through the Ministry of Lands and Country Planning established a Technical Working Committee to reform land laws, especially the provinces’ land act of 1960 cap 122, and push for the enactment of the National Land Policy into law. The Customary land Rights bill and the Land Commission bill were drafted. Green Scenery sees these actions by government as appropriate and timely and has been part of the process since the inception of the action, providing technical support to the process.

A four days stakeholders engagement and consultation on the land laws reform process was thus conducted with key stakeholders at district level and with community members at community level with a total of 64 participants. The aim of these consultations is to create a space for the voices of stakeholders at districts and community level to be heard in regard to the ongoing land reform processes. They could express their views, disagreement or approval to the laws that have been drafted and that will considerably influence their lives.

Radio WANJAY 100.1 Pujehun district was engaged during and after the five days activities in order to enhance the knowledge of Pujehun’s citizen on the land reform and more generally on issues around land conflicts.