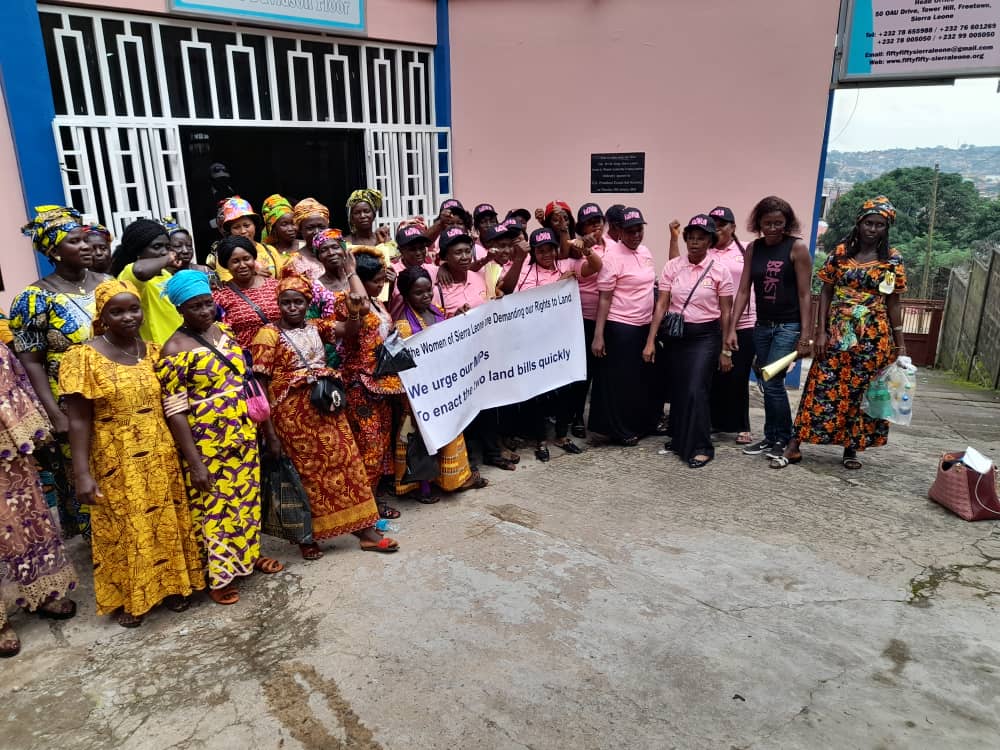 On the 26th of July 2022, Green Scenery and its networks partners Women’s Network Against Rural Plantation Injustice (WoNARPI), mobilised hundreds of women all around Sierra Leone to lobby and engage their Parliamentarians(MP’s), to lend their voice and speedily enact the Customary land Rights and the National land Commission  Bills that were laid in the well of Parliament for debates and enactments. The action came as a result of the general call made by the House of Parliament inviting the public to the pre-Legislative hearing on the land bills. As a result of the open call and the invitation made by the House of Parliament on the land bills, hundreds of women around eight provincial districts of Sierra Leone, converged in the well of parliamentarians, holding black cards, depicting land rights issues that are sensitive to the wellbeing of rural citizens, especially women who have suffered series of discrimination as a result of customary practices and lobbed with their Parliamentarian to integrate positive rights issues that favor rural citizens into the two bills. Key instances of issues women raised to the Parliamentarian are: Creating the space for women to ownership, access and control over land, women’s inclusion and participation in land decision-making processes, Environmental impacts issues on large Scale land Acquisition, land lease period from fifty years to thirty years, the issue of custodianship over land and the disadvantages of provinces land act of 1960 cap122. See cap 122 http://greenscenery.org/wp-content/uploads/2022/07/Cap-122.pdf and Green Scenery position paper on the land bills.http://greenscenery.org/wp-content/uploads/2022/08/Green-Scenery-Parliamentary-briefing-note-on-land-bills-1.pdf

In 2020, the government of Sierra Leone through the Ministry of Lands and the VGGT  Secretariat established a Technical Working Group for the review of land laws, especially the provinces Land Act of 1960 Cap 122, and push for the enactment of the National Laws Policy into law.

In combination with the National Land Commission bill, the Parliament will discuss on the 27th, Customary Land Rights bill, which will provide for the protection of customary land rights, and eliminate discrimination, especially towards women, under customary law. This bill will give women equal rights to own, hold, use, inherit, succeed or deal with land and declare void any customary laws that limit those rights. Furthermore, the bill demands that family land shall benefit women and men family members equally and that a woman whose husband died should continue to enjoy the land of her husband – unless she remarries.

Over 300 women from all around Sierra Leone processed on the 26th of July to the Parliament to observe the debate on the land bills. They came in numbers to ask their Members of Parliament to pass the two bills which will allow women to use, own, and inherit the lands of their families.

Members of Parliament speaking in the well acknowledged the effort of the Ministry of Land and gave their support to the Land Commission bill. Besides protecting women’s rights to land, the bills will regulate investments in the country for the benefit of local communities, the investors, and the economy of the country alike. The bill will request investors to respect the Free, Prior and Informed Consent before acquiring lands from land owning families.

Paramount Chiefs who initially expressed concerns over their loss of control over land governance through the new legislation, assured Parliament that they are now satisfied with the bill.